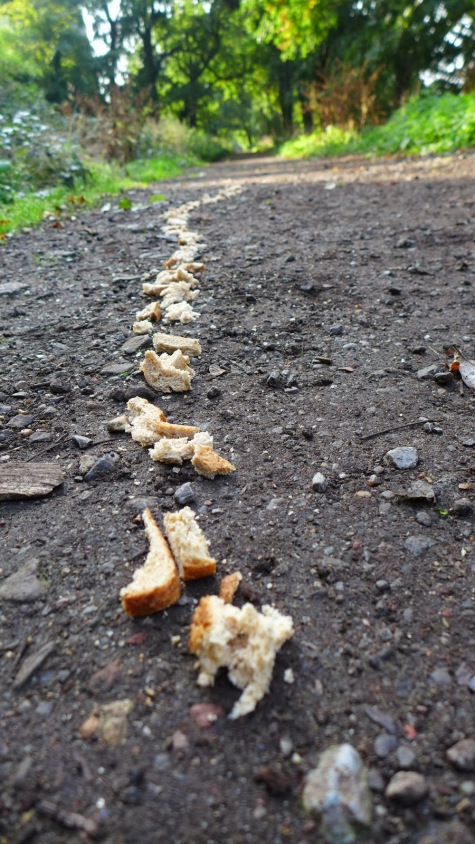 Once upon a time, there was a little girl who, like Hansel and Gretel (and, as Stephen Sondheim pointed out, really all of the famous fairy tale characters), was lost in a wood. It was a dark, dank and bleak place and she longed to find her way home. Had things gone the way she had planned, she would already have been home but instead, she found herself sitting on the damp ground trying to figure out just what had gone wrong.

It was her own fault, really.

Sure, she had started out on this little excursion with her eyes and heart fully open and aware of potential risks, but she was excited for the new possibilities that awaited her. Being a girl who had read a seen a lot and knew that things didn’t always work out, she also took necessary precautions should things go awry. This was, after all, a new path – a new direction – so it was possible she could get lost along the way so she filled her pockets with bits of bread to drop along the path believing these would lead her back to where she started.

In hindsight, the outcome was pretty predictable. I mean, it was bread crumbs, for goodness sake! What was she thinking?

As you would expect, what didn’t get carried away in the wind was quickly gobbled up by birds and squirrels or maybe hidden away in nearby trees for later consumption and by the time she realized this was the case, she was completely unable to even begin determining which direction would take her back to where she started. The starting point, though not necessarily perfect, was at least familiar and would put her in a place to feel re-grounded and able to make a new plan.

What the little girl didn’t realize is that even if her breadcrumbs had remained and she couldn’t have followed the same path back the way she had originally come because the home she had left would not have been the same. Nothing is once we leave and come back.

I know that by now you have all figured out this little story is about me. I am the little girl lost in the woods and what has put me here is my oh-so-wise decision recently to dive head first back into the dating world right after making the major life change of moving into a new house with 4 other people.

I know. Probably not my wisest decision and I know you will be shocked to hear the relationship didn’t pan out.

Perhaps it was a timing thing. We probably couldn’t have started the relationship at a worse time for his business and I certainly was going through changes in my life, but regardless of the reasons, the chapter closed all too soon and here I was, left in the middle of the wood.

I couldn’t help but wonder if maybe things with the relationship turned out the way they did because I had left the breadcrumbs to find my way. Would the outcome have been different if I hadn’t tried to give myself an “escape”?

While it is in my nature to try to assume responsibility for just about anything that goes wrong, I would have to say that in this case, regardless of my attempt to make the relationship failure all about things I did or didn’t do, I realized that the breadcrumbs were far from the end of the relationship. They were, in fact, a gift much like the seeds that Jesus speaks of in Matthew 13.

Now I realize those of you theologians out there are balking, screaming at the screen that the purpose of that message wasn’t about my personal love life but about the planting of seeds of faith and the subsequent harvest of believers. I get that. I really do. But as I listened to a sermon on this passage recently I felt God telling me there was an additional meaning much closer to my heart and circumstance.

As I listened, God spoke to my heart telling me that those breadcrumbs I left for myself were never to have been used to find my way back to where I had been because I was no longer the same person I had been when I started the journey even though the journey itself was relatively short.

The crumbs, you see, were really just little pieces of myself – good and bad – that were left on the trail. They were memories, feelings and expressions that I was able to unbury from my heart and leave behind, no longer needed for my journey.

Of course, I didn’t get this for a while. I can be stubborn and obstinate (no comments from the peanut gallery on that, please). For days – even weeks – I found myself trying to find those pieces and seeking desperately for ways to gather every little crumb back up and allow it be part of me gain. Even as I type this, I realize how ridiculous that sounds, but how many times have we tried to keep everything just as it is because even though we know it’s not healthy, at least it’s comfortable?

But God didn’t allow that for me this time. I had grown and shed those things and God was going to ensure that those things were carried away further away from the deeper into the wood I went. That journey into the woods was a call from God to follow Him and grow and, as we all know, growth comes at a cost. We do not find new mountaintops of faith nor new joys in life without some pain.

And this process was indeed painful, but as painful as it was, God knew I was ready. The crumbs I had left behind were no longer useful to protect me or define me and with God’s grace, they may perhaps land in new, more fertile ground where they could one day become part of a testimony or ministry that is associated with me but not part of me.