I am probably going to date myself here, but I am not always a huge fan of social media. I have grown so tired of the way people use places like Facebook to bully and berate others  because they think, feel or believe differently than others. I will say, though, that amongst the cute baby animal pictures and inspirational quotes I have found wonderful performances of music that have changed the way I hear pieces of music I have known for nearly my entire life.

Such a thing occurred recently when I saw a YouTube of a performance of one of my favorite songs, Sounds of Silence  by the heavy metal band Disturbed.

I had no idea what to expect. I know that as musicians, this band likely has musical insight and depth than what the general public is typically exposed to but this is one of the staple songs of my childhood! Was this heavy metal band going to destroy this folk song for me forever?

The dark, ominous tone of David Draiman’s voice at the beginning of the song and the power and angst I heard in his voice and instrumentation at the peak of the songs musical arc opened my mind and heart to new understanding of this classic song. 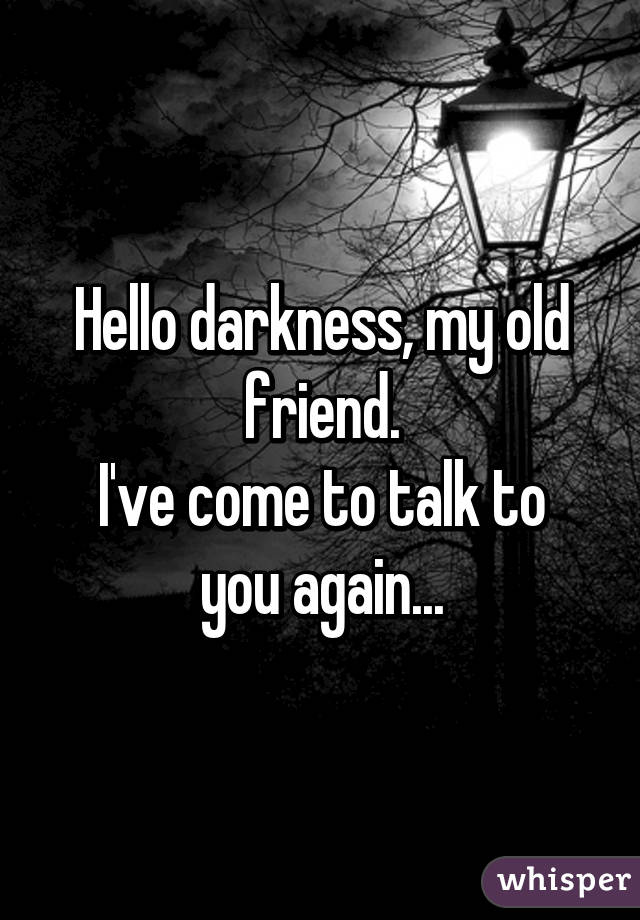 I had always related the opening line of this song to sadness and depression and perhaps that is a layer of meaning of this lyric, but as I listened to Dreiman’s rendition, I heard the resigned voice of a troubled soul as he faced once again the lure of what the world says is important – the power, the prestige, the money – those things that turn us away from the Light that can only be found in God.

I heard the struggle in Dremain’s voice as he acknowledged to the darkness that the seed of faith God plants inside each and every one of us refused to die but rather than making the choice for God easier, it created a battle that only grew – and continues to grow – in intensity. It is this intense battle for our hearts and minds that creates the sound of silence.

Regardless of how hard we try, the light of God will always pierce the darkness we create in this world. His goodness cannot and will not be lost, but we often allow ourselves to be so distanced from this light that we are unable to see it and bask in its warmth; so overwhelmed by the clamor of the world that we become deaf to His calling our name. To me, this is the sound of silence.

The sound of silence is sitting in a room filled with people who are all shouting at the top of their lungs about their discontent and anger but not being able to comprehend a single word.

The sound of silence isolates us and keeps us from extending our arms up to God and out to our fellow man. Instead we focus on ourselves; on trying to make ourselves god-like by pursuing  wealth and power, celebrity and notoriety and finding only emptiness and disappointment.

Most notably, the sound of silence is the sound of the believer refusing to speak of God for fear of being seen as unintelligent, closed-minded or judgmental. It is this  part of silence is that is cancer – a barnacle – that grows over our ears and eyes keeping us from seeing the pain of others, hearing their calls and answering them in love and compassion.

I, for one, am heartbroken by this deafening silence. I long for the ability to take the arms of God and His compassion and love for others without fear of retribution. I long to find a way to turn the eyes of those around me up toward the One who can save and away from the “neon gods” – the power, the money, the empty promises of this world.

And I long to speak aloud the words of the prophets that are indeed written on subway walls and tenement halls so that they can be heard over the din of our petty arguments.

The question is…its been 53 years since Simon and Garfunkel recorded this prophetic song. How much longer will it take us to heed its warning?

One thought on “Sound of Silence”